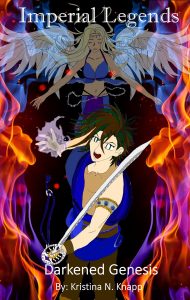 Buy Here!
As all legends begin, one person must significantly alter their world for generations to come. Displaying courage to take a stand for what they believe in, to be willing to do whatever they need to accomplish the foal with unwavering faith. Not even the fear of death can scare them from completing the mission which they set out upon. Their hearts will press on to see the bigger picture achieved and pursue the mission until the very end, no matter what the price they need to pay, even if they need to lay down their lives to complete the mission. Faith will be tested as one man sets out to accept a new destiny and to protect the world in which he loves.

We will see the rise to power of one man that will change a world forever. In a war-ravaged land, another man accepts a new destiny that will alter more than just one universe for generations. As the world of Kyūkyoku is on the verge of a revolutionary war, the Imperial war. Tensions are mounting as regions brace themselves for the unknown. Alliances are formed but one of those alliances will create a bond that will push the limits beyond both time and space, connecting two different worlds forever. Will this risk be the deciding factor or will it launch both worlds into an uncontrollable chaos?